“Five gallons. Five……gallons. Are you kidding me?” Those were my words to Sparky as he began the extraction process of honey from his two bee hives. But, I am getting way ahead of myself, so let me back up and start from the beginning.

Dan a.k.a “Sparky,” started bee keeping three years ago. The first year, the hive cross built on the frames and he lost the whole hive. Year two, saw a marked improvement as the hive prospered but he did have an episode where half of the bees swarmed and left the hive never to be seen again. Dan kept at it, studying and learning and growing his knowledge base and successfully kept the hive alive over our very cold and snowy winter. We did not get any honey year two because the bees were just getting established and needed all their honey to survive the winter. This year hubby added a second hive and actively fed his bees sugar water for most of the summer. Last week it was time to open the hives, cross our fingers and hope those busy bees made enough honey to share with us. That’s where the five gallon thing comes in because those bees rewarded Dan for all his hard work and dedication, with FIVE GALLONS of honey! And let me tell you that honey is amazing! Raising the bees is just one of the tasks involved in obtaining honey. Getting that honey out of the combs, into the extractor and then bottled took the better part of three days but it was and is so worth it. I thought I’d show you in a photo essay, what the process entailed. So, here goes!

Bee-man coming down the hill into the field where his hives are, carrying a smoker and wearing his protective gear. 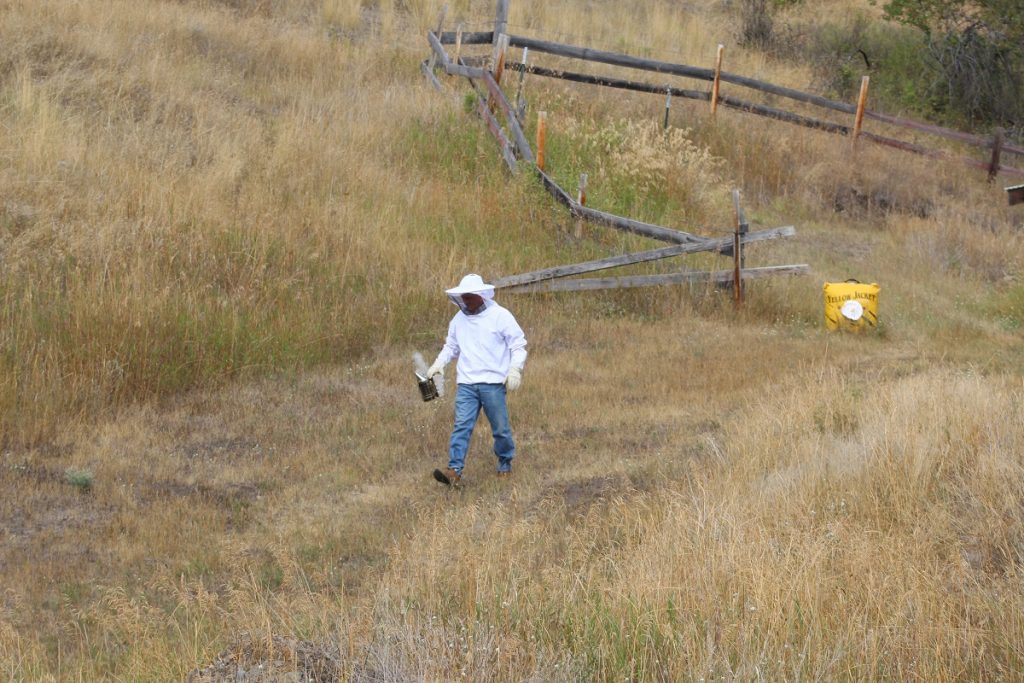 The smoke calms the bees down, but they are not terribly aggressive. In three years Dan has never been stung. But, we’re talking thousands of bees and keeping them calm is a good idea! Opening the lid to the Super, Dan adds smoke to the hive. 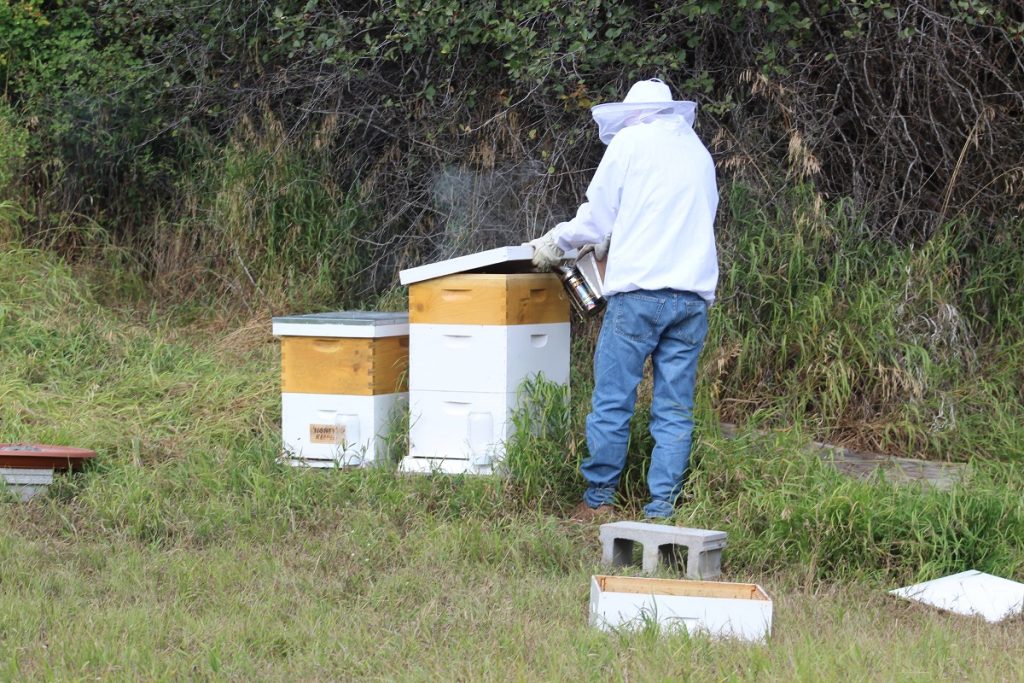 A little more smoke so they become nice and relaxed. 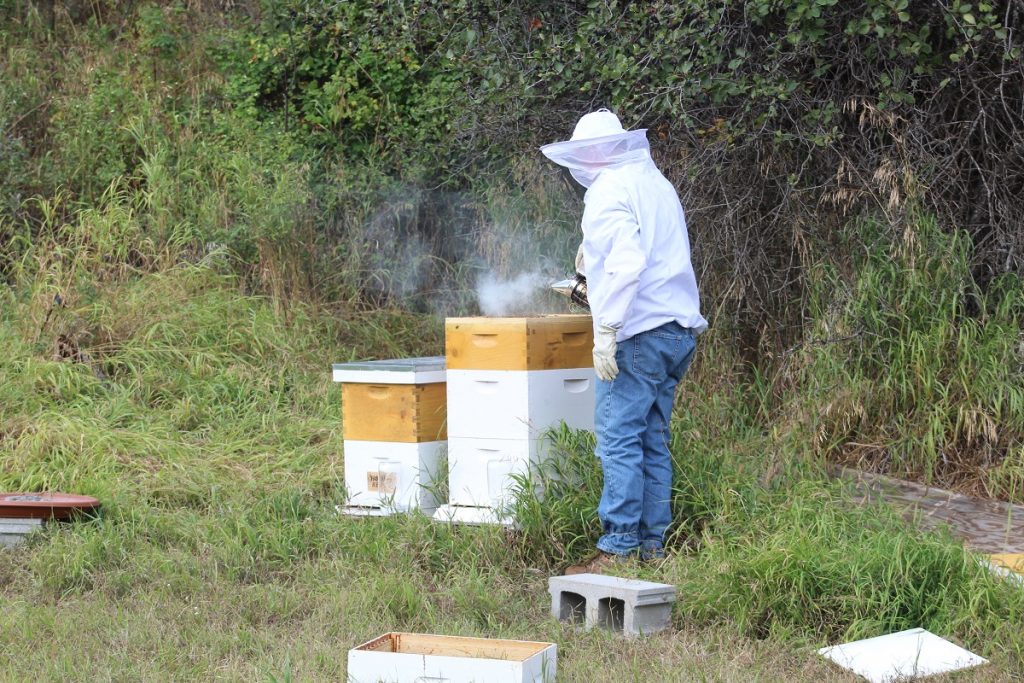 Setting the lid aside, he is surrounded by thousands of buzzing honey bees! 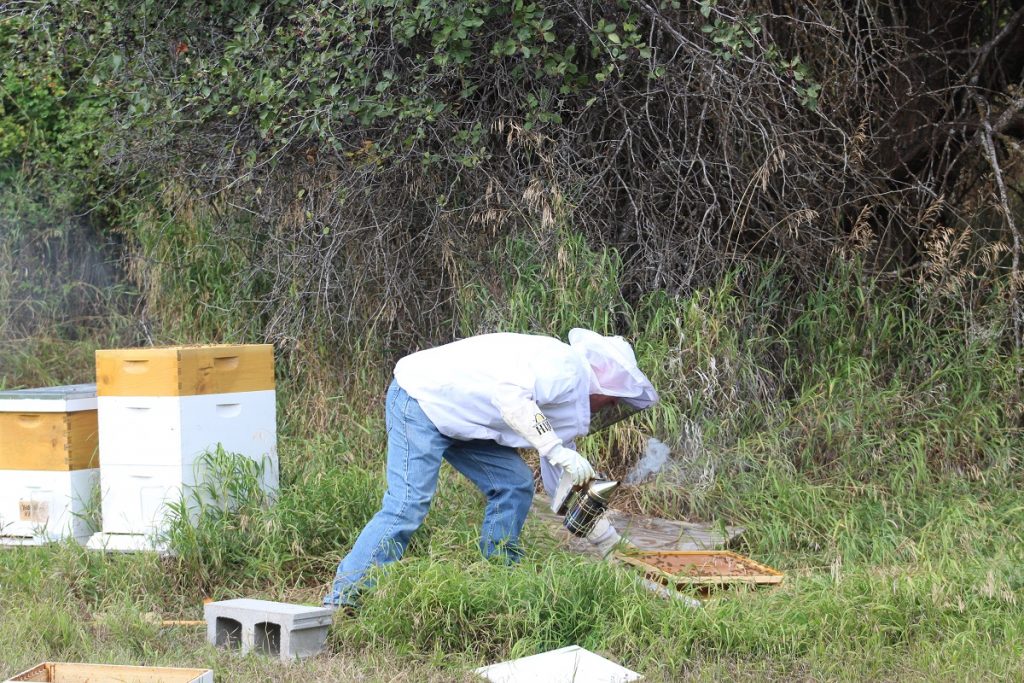 One by one, Dan carefully removed each bee covered  frame and gently brushed all the  bees  off  the  honeycomb. He  placed  frames  into  a wooden box he built  to  transport  the  bees  up  to  his  shop  to  begin  the  honey  extraction. 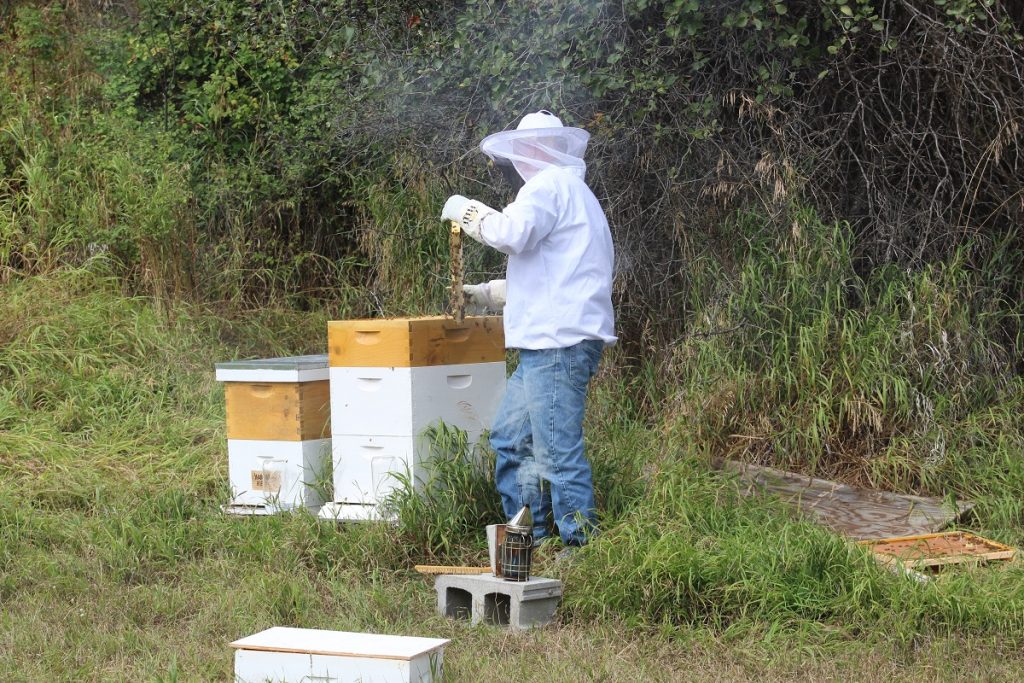 And this is where the lens fell out of my camera, damaging it so the next few photos came out distorted :-(.  In  order  to  get  honey  out  of  the  comb,  Dan  took  a knife  and scraped  open  the  wax  caps  covering  the  honey filled  cells. 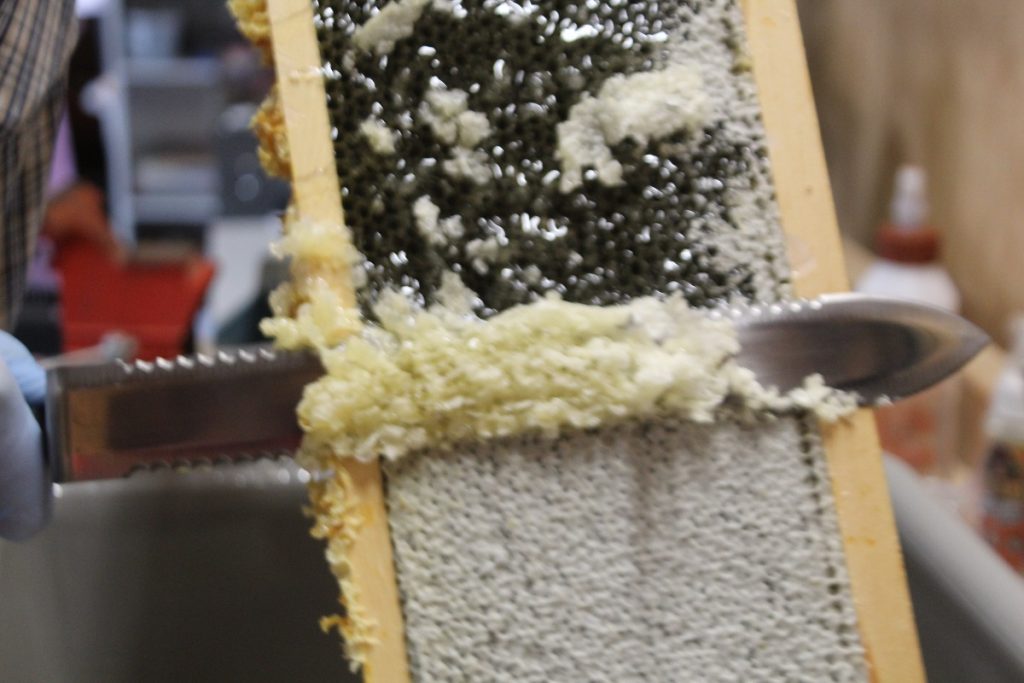 The wax is not wasted. After all the honey is removed, the wax is melted down to extract the remaining honey. This honey is not “raw”and  has  a darker  color  and  a more robust  flavor. Great  for  cooking! The  actual honey  Dan extracted is “raw”honey.  It has  not  been  exposed to  any heat source. 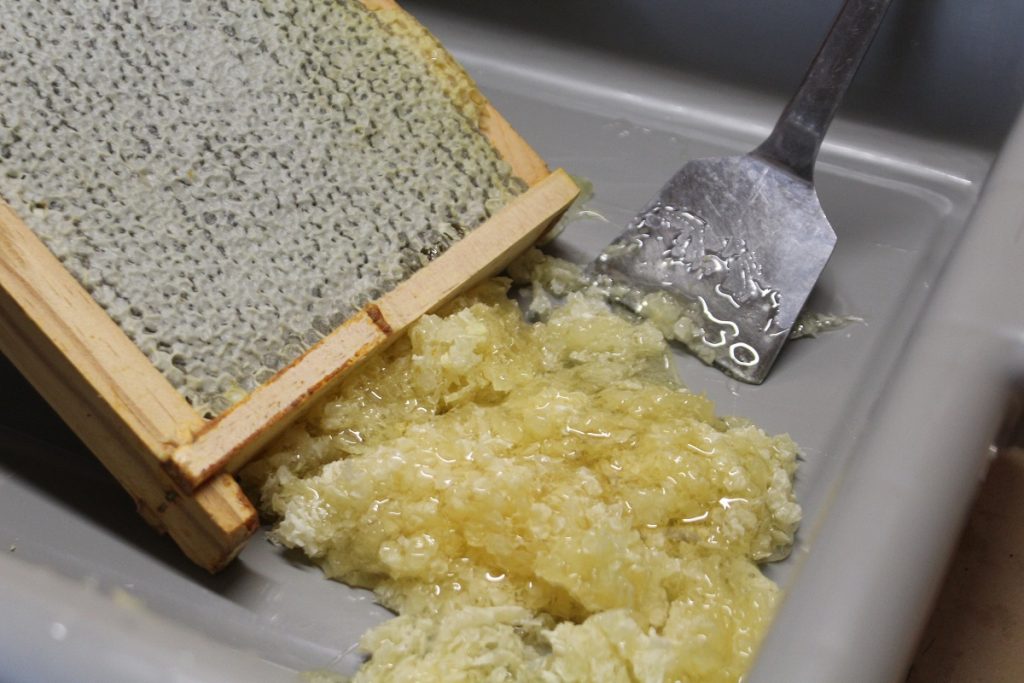 This contraption is the extractor. The honey filled frames are inserted into the container and hand cranked around and around for 150 turns as fast as Dan could crank it! The centrifugal force pulls the honey from the combs and fills the extractor. That’s when Dan knew he was getting a  whole heck of a lot of honey! 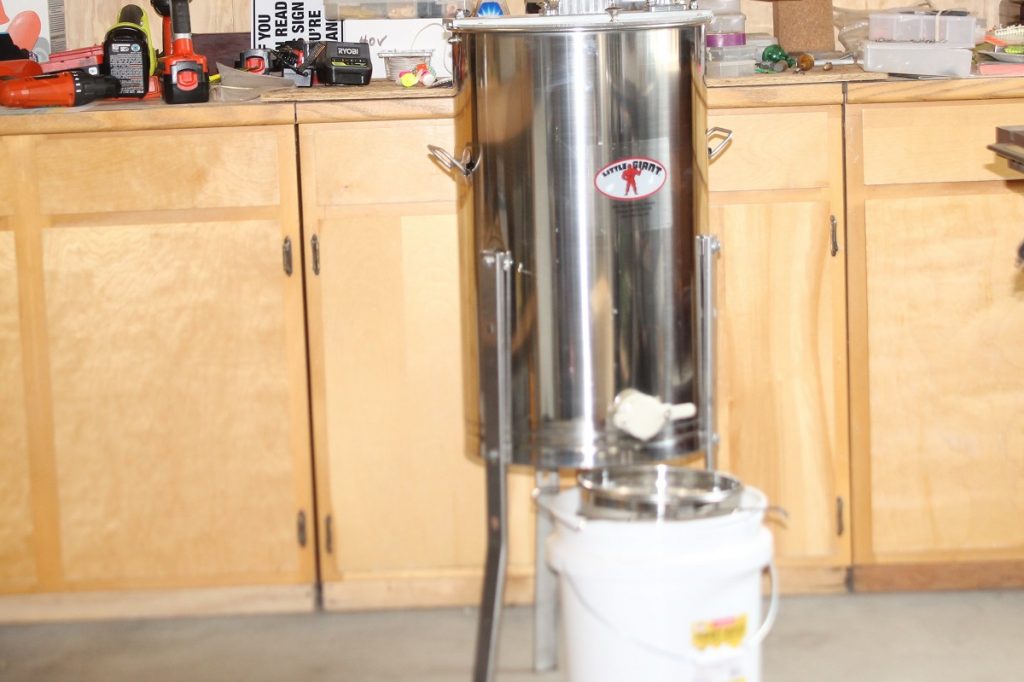 In my damaged camera lens image you can see two of the frames inside the extractor getting ready to be spun down. 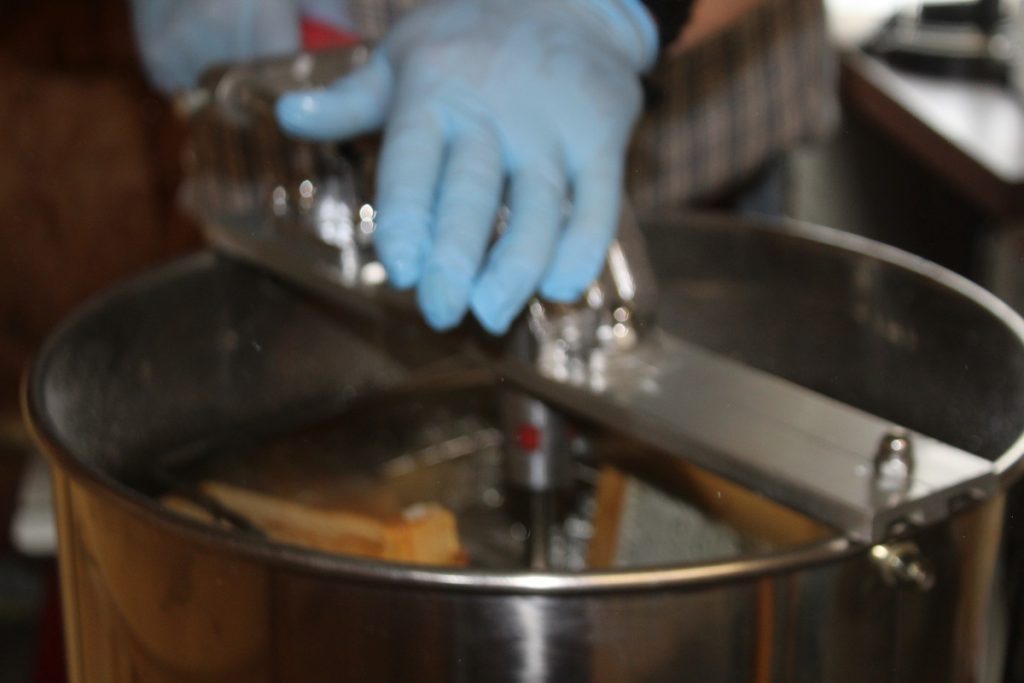 That extractor was filling up fast and we were getting pretty excited and also pretty amazed at the amount of honey coming out of the combs! The honey is then drained from the extractor into a three layered strainer to remove any impurities. There really weren’t any impurities but it is imperative to complete the process. From the strainer, the honey drains ( as SLOW as molasses in January) into the food grade honey bucket. 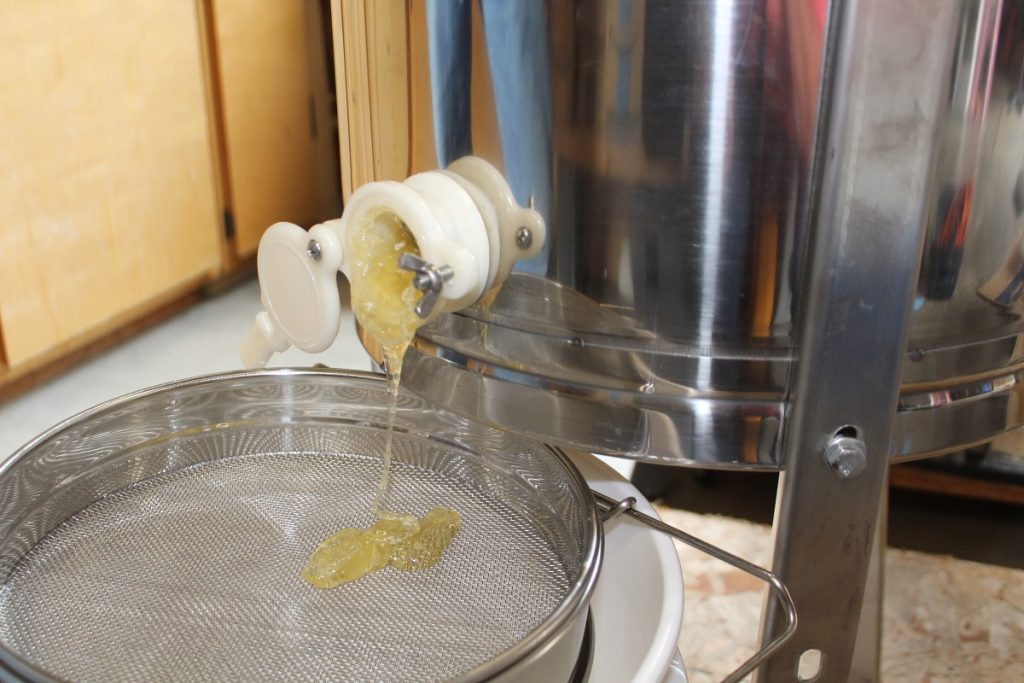 Then the bottling process began. It involved sitting patiently and letting each sterilized pint jar S-L-O-W-L-Y fill. Dan filled 50 jars! The jars sit for 24 hours so the air bubbles dissipate. 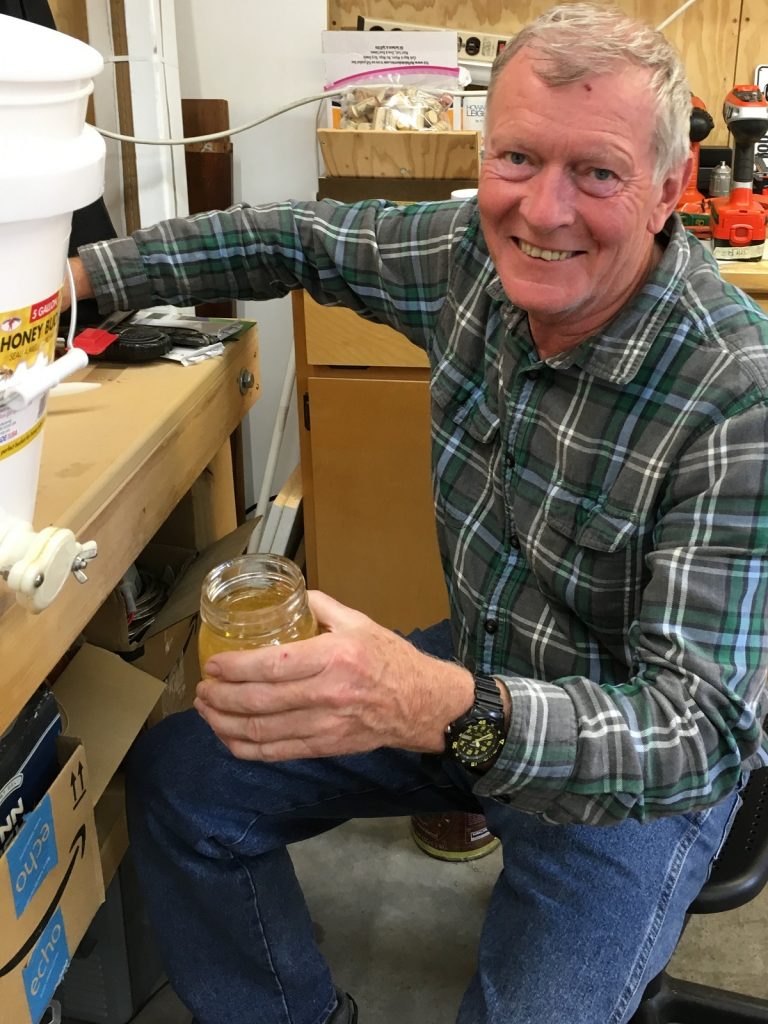 Then we labeled them as “Local Raw Honey,” and sat and admired their beautiful color and how awesome honey bees are to make such a delicious product!

We now know why honey is not inexpensive to purchase. It is a labor intensive process but the results are so worth the effort. Dan is planning on expanding his honey operation next year as the equipment is not cheap and he might as well maximize the return on his investment. Besides the expense, the benefit of having lots of honey bee pollinators is incredible! We need bees to pollinate our gardens and our fruit trees. So, the more, the merrier!

Thanks for stopping by today friends. I do enjoy sharing our lives with you all from up here in the Back of the Beyond in Ferry County, Washington.

Until next time, enjoy your journey into late summer and have a honey of a good time!