Sparky’s favorite breakfast dish in the whole- entire- wide -world ( that’s covering a LOT of territory!) are Fritattas. And boy oh boy, are they ever tasty! A Fritatta is really nothing more than an Omelet where all the ingredients are mixed into the eggs instead of being a filling for the eggs. Once the eggs are set, you just pop it under the broiler until it is warm and bubbly and maybe just a little brown on top. The best part is that they can be made with just about any leftover vegetables and meats in your fridge or I as did this time, a planned Cauliflower and Ham Fritatta. I cook our Fritattas in a heavy 10 inch Cast Iron Skillet, but you can use any skillet you like as long as it can go under the broiler for a couple of minutes. This Cauliflower/ Ham version is Dan’s absolute favorite and we both love the flavors and texture.

You know, one of my favorite cooking tricks is to prepare everything in advance and set it all aside. That way when I start to cook, there is no stopping and looking for ingredients or stopping to prep an ingredient for the next step. Just bing, bang, boom and it’s done! Ready? Let’s build us a Fritatta! Here’s what we will need 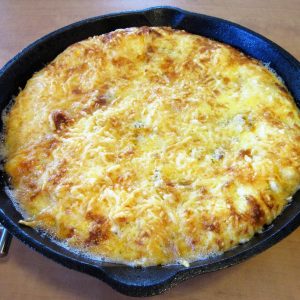