Move over Apple Crisp. You have a delectable cousin that uses some more of our wonderful Autumn fruits to a delicious end! This Crisp has been a favorite of mine for years, but Dan has told me over and over that he doesn’t like cranberries. So of course, I set out to show him the error of his ways because I’m evil like that.  His pronouncement? “Absolutely delicious!” Score!! Served with a really good quality of vanilla ice cream, this recipe is a keeper. Celebrate Fall and the harvest season by making use of fresh, ripe pears and cranberries! 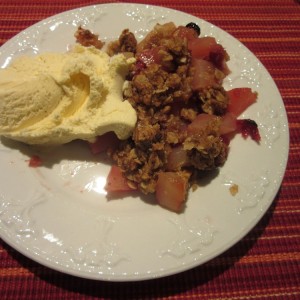