Really and truly it sounded like a good idea at the time. Sometimes Dan and I just look at each other, scratch our heads, look all serious, then burst out laughing saying “what have we gotten into this time?” Back in May, after a strenuous Alpaca show we headed over to the coast and Westport, Washington for some R&R. Then…this happened. The Tuna fishing industry is big in Westport and we wanted to buy a couple of whole Albacore Tuna, have them bled, filleted and ready to can when we got home. Fresh, home canned Tuna is amazingly good. Did that happen? Well….no, not exactly. All the available whole tuna was deep frozen and weighed about 15 lbs per fish. The fishmongers could thaw it, remove the blood line and fillet it given 24-36 hours notice. We, of course, only had 12 hours. So the fishmonger told us we could take home the whole frozen 15 lbs ( 15 lbs! You hear me? 15 lbs! 15 lbs of TUNA!) He also said we could watch You Tube videos on how to fillet them, but “watch your hands. If you run your hands up the fish instead of down you will be impaled with incredibly sharp bones.” Us: ” Sure, we can do this.”  Ummmm…….not one of our more brilliant ideas.. So, since the end of May, we have two, 15 lb Albacore Tuna in our freezer because, how in the heck do we unfreeze them? These things are 3 1/2  feet long! Bath tub? Heck NO! Alpaca water troughs? Are you kidding me? So, we have $75 worth of Albacore Tuna in our freezer with no clue as to what to do next. I suggested throwing them in Curlew Lake and taking a photo of Dan reeling one of them in. That may happen yet.

But……..don’t leave me. Oh no…..that is not the end of the story. Not even a little bit. The tuna story was just a prelude to the real ” what have you gotten us  into now Ollie story?” Oh yeah…..it’s a doozy!

When the kids were here last week, we took them out to our friends ranch. Kathy McKay runs the K><K working guest ranch. We showed the kids the lodge, the “petting” animals and then I asked Kathy where the Long Horns were. That was my first mistake…..of many. Loading us into the deluxe ATV, she herded us up into the hills where the Watusi/ Long Horn cattle were grazing. The she said, “Hey you guys have a lot of acres, how about taking a couple of these young bulls, let them graze on your land and gain a couple hundred pounds? They are great grazers and will keep your fields clean.” Yep, we said ” Sure, what a great idea!” Now mind you, Dan and I know NOTHING, NOTHING about cattle. We both have been “around” dairy cows before, but cattle? And this is how the rest of the story unfolded……………………………………

Sparky walked the entire fence line to make sure it was intact. He found one weak spot where a tree had fallen and landed on it. Not to worry, it was waaaaay up the hillside and we convinced ourselves that the bulls would stay down below where the water and food was located.

Kathy brought the bulls over and we let them through the gate in the far lower field and Kathy headed for home. Dan and I watched as the bulls slowly walked, looked around and then…….they took off headed for the hills! We watched them, puzzled, then as awareness grew we were looking at each other, slack jawed as reality set in. Those gosh darn bulls raced up the hill along the fence line and then………they disappeared over the crest of the hill! Yeppers, they found the one small section where the fence was not intact and they were on the lam

We hopped in the ATV and took off up the road to find the buggers. We looked everywhere! Walked the entire fence line.  Did we see them? Heck no! Oh bother. Now what? Well…..this is what was next.

I went home and started calling all our neighbors to let them know we had two fully intact bulls on the lam. Dennis and Sandy, Greg and Lillie, Jim and Lin. When I reached Lin who lives three miles up at the end of the road she said ” I’m looking at them right now. They’re at the corner of our property.” Dan and I piled in the ATV and headed up hill to Jim and Lin’s where we saw a whole gang of friends and neighbors surrounding the two runaways. Unfortunately, despite heroic and  repeated efforts to corral the silly beasts , they took off over the hills. We can’t thank them enough for their efforts!

We have the most wonderful neighbors and friends! 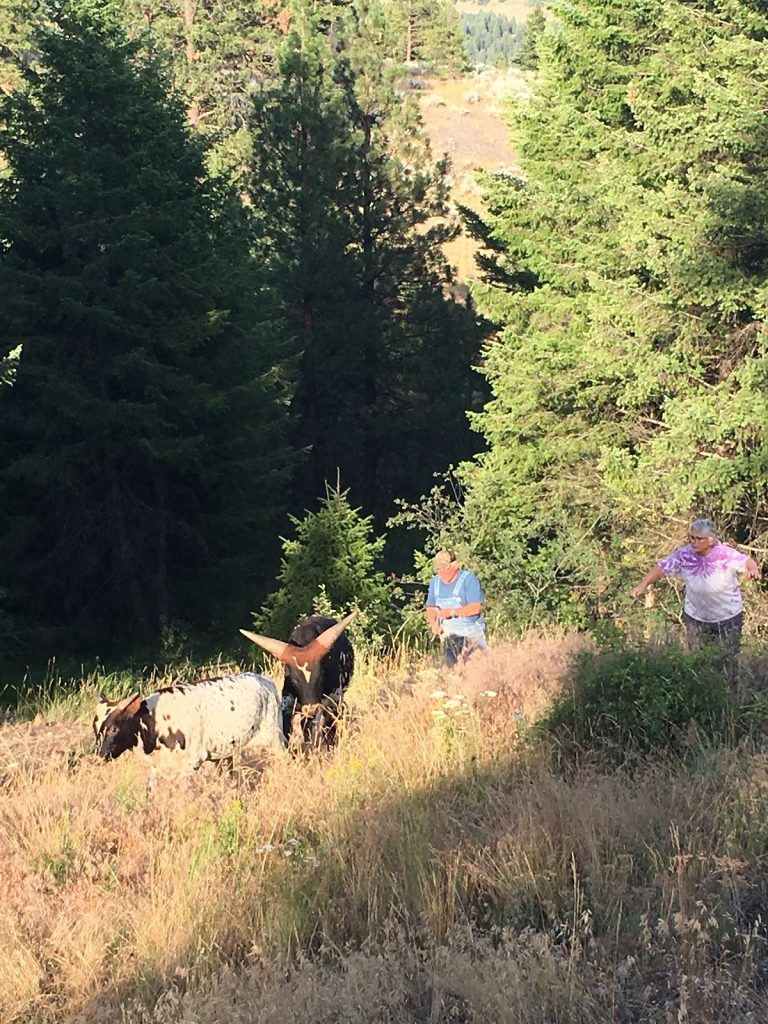 The terrain up here is steep, mountainous and treacherous too. Looking out over the mountains Dan asked ” where the heck are they,” and at that moment I looked up to see two small spots high tailing it over the mountain in the distance towards Trout Creek Road. We raced back down the road and climbed into the truck and headed over to Trout Creek Rd.  Did we spy them? Nope. Okay…..time to re group and go home. I called Kathy and told her we lost her bulls within 15 minutes of their arrival. Her response?: ” Oh…don’t worry, you have lots of good grass and pasture, they will probably be back.” Sparky and I just looked at each other. “Really?” I called the Sheriff department to let them know we had 2 fully intact bulls running “born free!” They laughed………………… Mind you we live in open range territory, but mostly we have heifers and steers, not fully intact bulls roaming “home on the range.”

Let’s fast forward to the next morning, shall we?  At 6:30 am, Dennis and Sandy called to say our bulls seemed to have spent the night in their yard. Dennis told me he had gone to bed forgetting to turn off the radio and the light in their shed and it appeared the bulls enjoyed both the music and the light. He said they were heading over to Bill and Laura’s old place and maybe we could get them there.  Dennis  said ” Let me know if I can help” before he hung up never to be heard from again. I mean……we are talking about BULLS. Fully intact BULLS! I yelled to Dan that they were just up the road as I headed for the Arctic Cat. So I filled a bucket with sweet cob, jumped in the Cat and raced up to Bill and Laura’s empty place. Sure enough, there they were. But, they wanted no part of that sweet cob and instead loudly” bellowed” their unhappiness over and over and over. So….this is where Karen’s  cattle herder mentality took over. I was DETERMINED that these two escapees would be back in the pasture where they belonged, so I started walking and singing old Marty Robbins cowboy songs all the while shaking the sweet cob bucket. At first they wanted nothing to do with it or me. But very slowly as I crept forward, they started moving down the hillside. I sang every old C&W song I could remember and shook that sweet cob bucket while saying “get along little doggies, get along.”. I was also cursing Dan and saying ” where the heck is he?,” not knowing he was already at the bottom of the hill not willing to say a word least he spook the cattle.  So, we crashed through the underbrush and down the hillside to the road with those bulls turning their massive horned heads to stare at me. I tried to keep my cool but at the same time wondered if they were to charge at me did I have any chance of out running them? Doubtful. Very doubtful.

Yeppppp….pushed them from top to bottom. 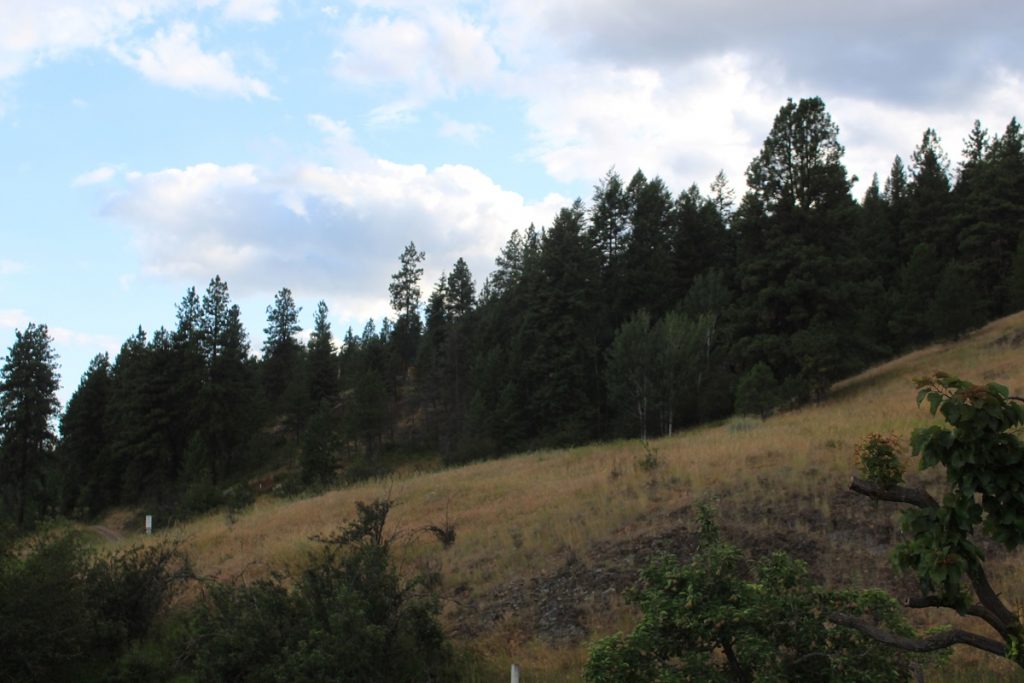 I met up with Dan and we herded them down the road. This looooong road. 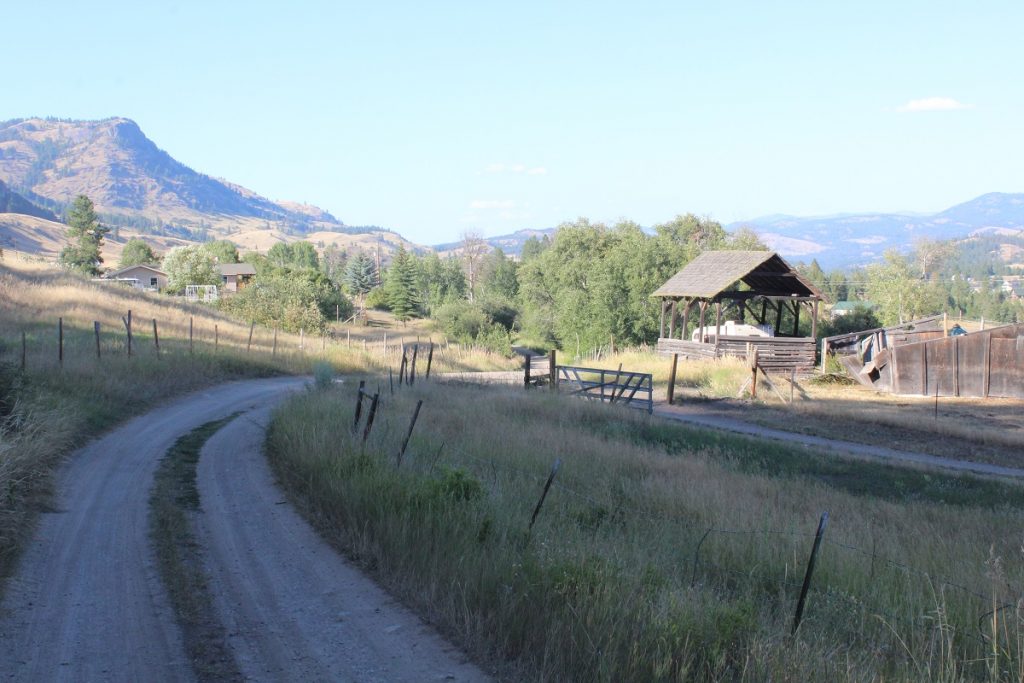 All the waaaay down the road. 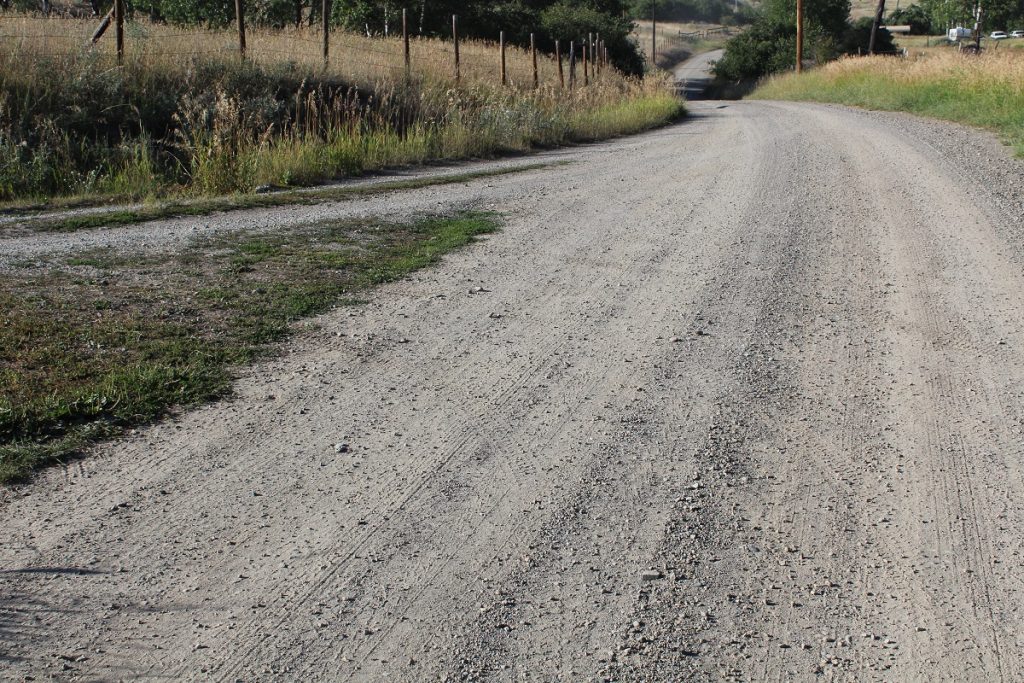 As we got closer to the gate, Dan ran ahead of me to both open the gate and to block the road to keep them from going any further. 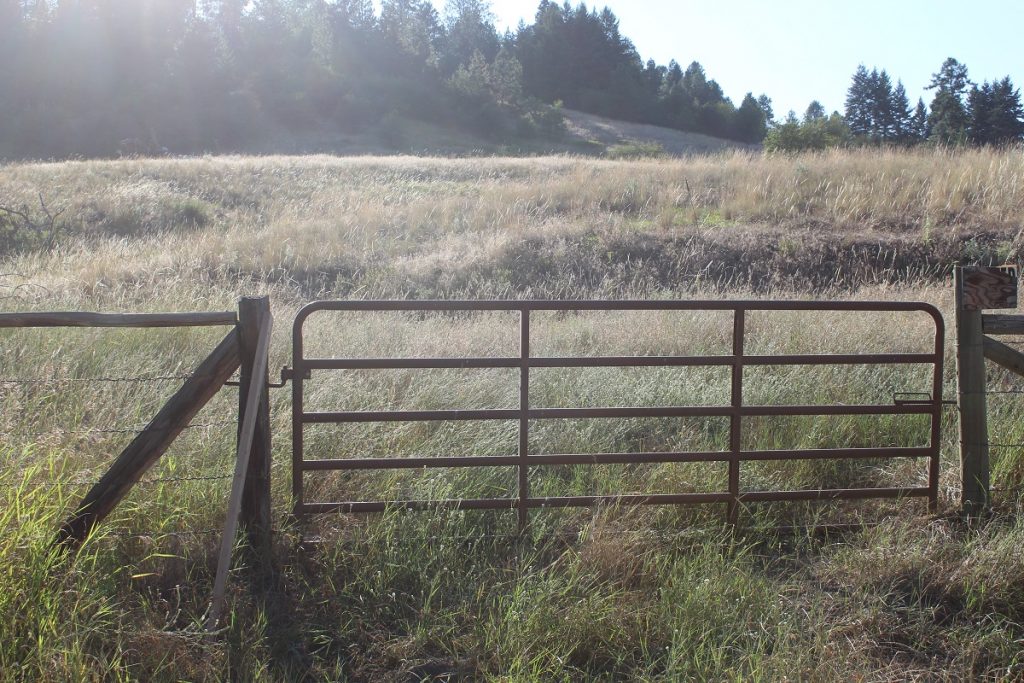 I lead the bulls up the hillside through the field, around the fallen tree and back downhill to where the water trough and to the fenced pasture. They stopped at the water and tanked up as apparently they had not found water on their travels and were down several gallons. 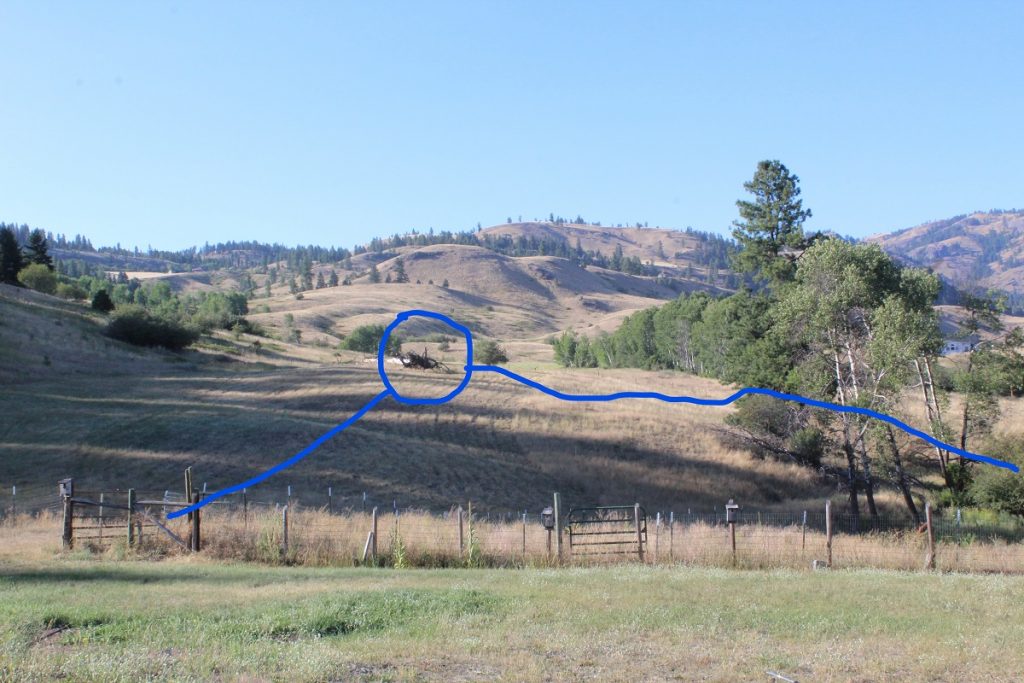 After the bulls re-fueled, they quietly walked into the pasture and made themselves comfortable under the shade trees. I honestly think they were happy their wild adventure had come to an end. 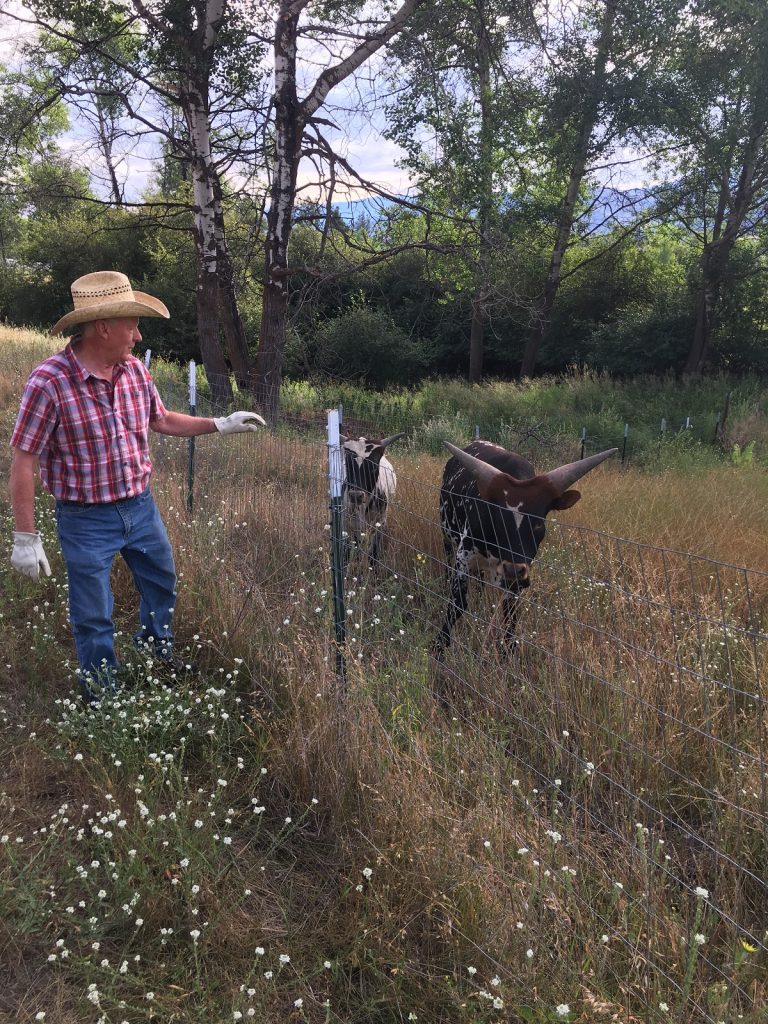 The boys have had a couple of weeks now to settle in and they have done that quite nicely. There have not been any escape attempts and believe me if they wanted out of that pasture, they could knock that fence down in a single step! But because they have lots of food, water and sweet cob they are content to stay put. 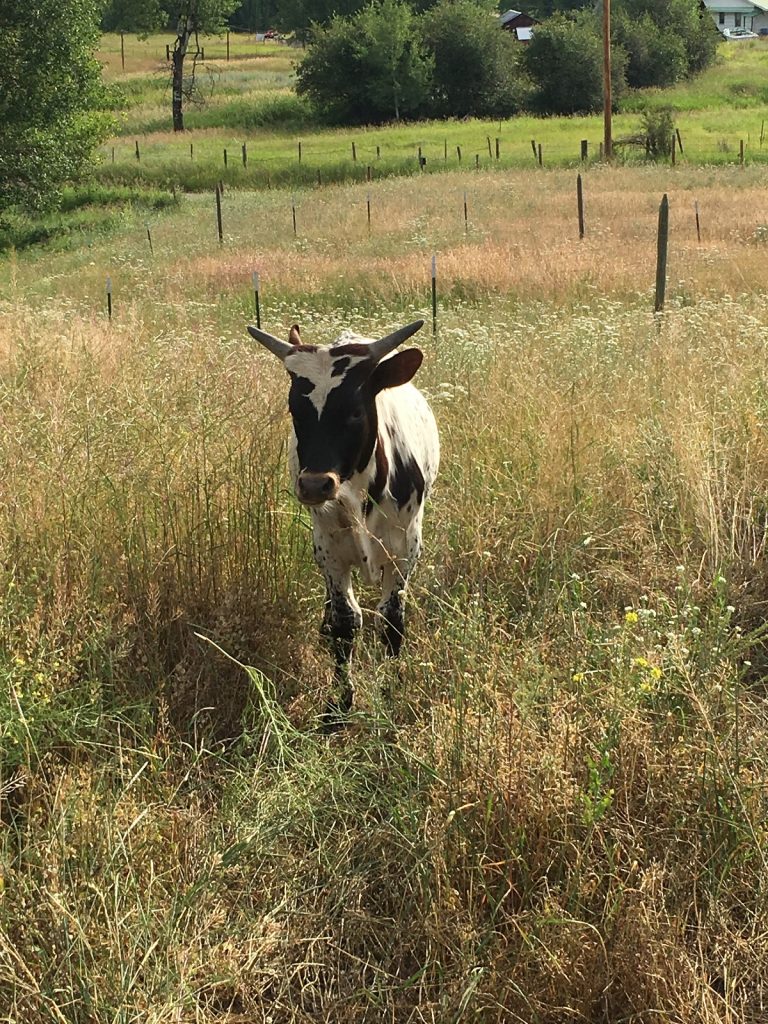 This big boy is a bit of a bully but the two of them seem to get along nicely. 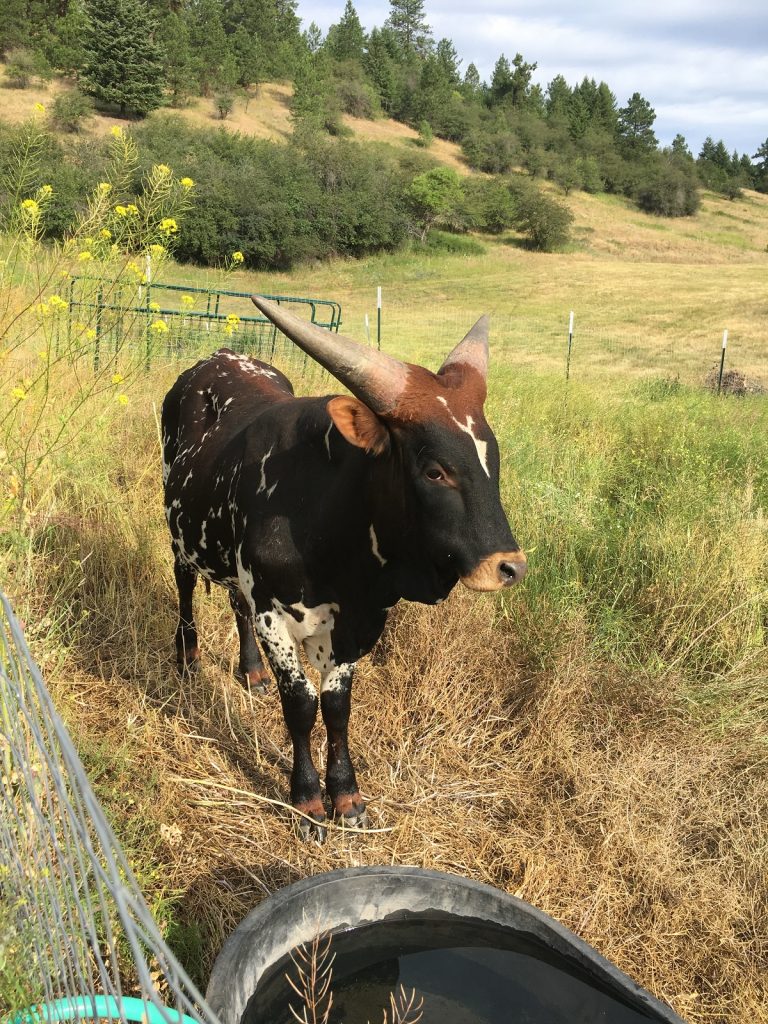 I know this story is full of Bull, but it is 100% true! Sparky and I are now officially amateur cattle ranchers, at least until November. After that I am certain we will come up with another “well, it seemed like a good idea at the time” adventure!

Thanks for stopping by today friends! We never know where or what to expect as we journey through life, but it’s always best to expect the unexpected and enjoy the adventure.