It seems we have been on the go non-stop since the first of March this year. What with multiple trips to Spokane as well as our usual mad dashes to Omak and Colville for shopping at Walmart and Home Depot, we have put many, many miles and hours on the new truck. But some of these trips have been fun too, especially when we traveled to Nevada to see family. And then, there were two very special excursions that were both tons of hot, dirty, smelly work and a ton of hot, dirty, smelly fun! Alpaca Showtime! That’s right, Kettle Ridge Alpacas along with our partner, Strawberry Fields Alpacas attended two shows this Spring where some of our Huacaya Alpacas were entered into competition to be judged on stature, conformity and the quality of their amazing fleece. Yes, these little fluffy butts are entered into competitions held all over the country. They are young Alpacas. Usually after the age of two, how they will look as adults and the quality of their fleece has already been determined, so they are no longer put in the show ring. This year we entered Alpacapalooza which was held in April in Vancouver, Washington which is on the border with Oregon. It’s a nine hour drive for us. The on May 10th we headed down to Portland, Oregon for the Columbia Alpaca Breeders Association show. Again, a very lengthy, tiring trip for us. But for our partner it was an even more tiring trip as  Chris had to load and haul all the Alpacas.

Halter training Alpacas is NEVER fun! Rounding these little buggers up is truly like rounding up a herd of cats. Big cats. Cats who leap and pounce and gallop and pronk and who do NOT want to wear a halter! Having accomplished that little chore, we now have to convince the Alpacas that they want to walk on a lead……but they really don’t want to. Nope, not even a little bit! Part of that reluctance is that they are timid and scared. The other part is just stubbornness. Teaching them to trust us requires time and patience, a trait that one of us is much better at than the other. Ahem………….But once you have that trust, you can actually see and feel these little ones relax and that’s an almost magical moment.

This is Northern Lights on the day he was born. A tough delivery and we were not sure how this was going to end. 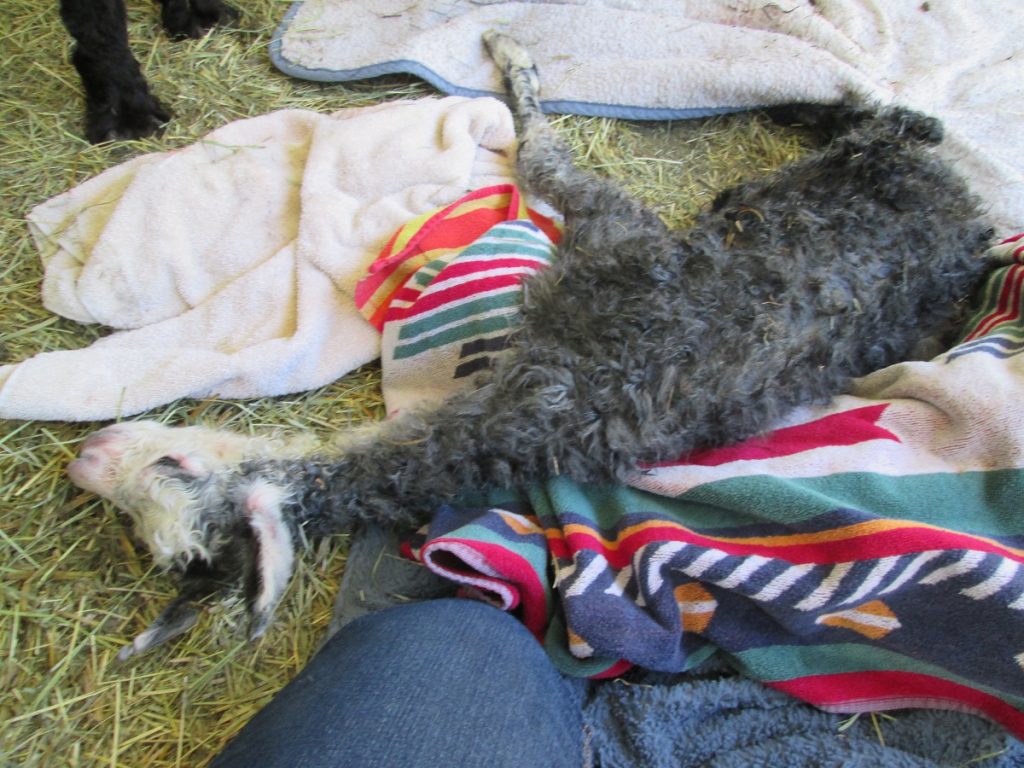 This was Northern Light two months after  his birth. He seemed to have recovered just fine! 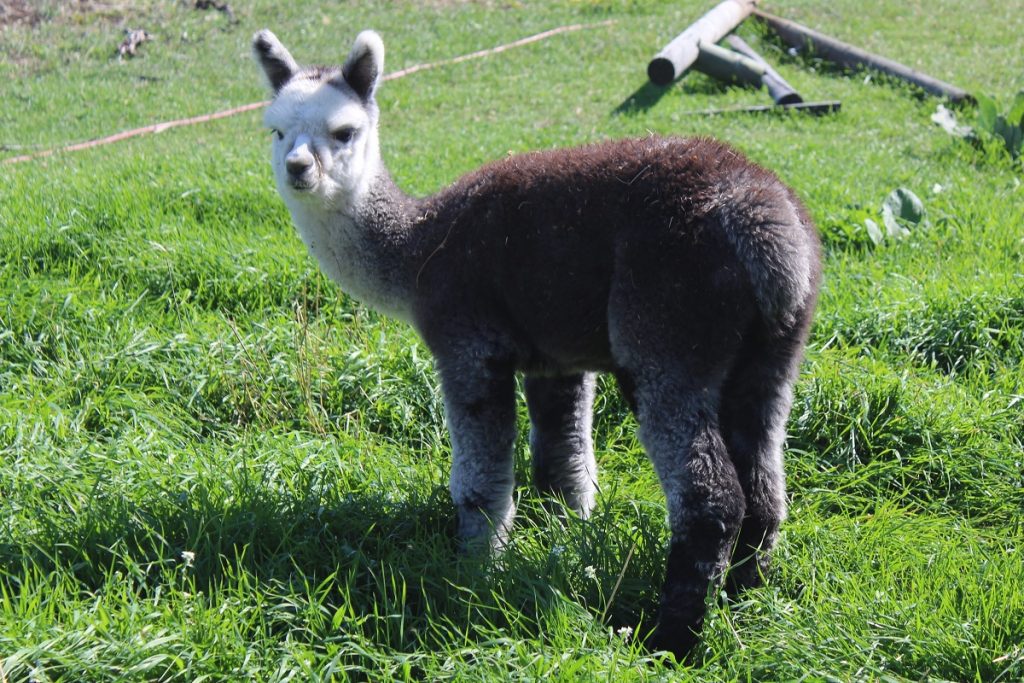 And here he is today as a ribbon winner at CABA, the Columbia Alpaca Breeders Association show down in Portland, Oregon. 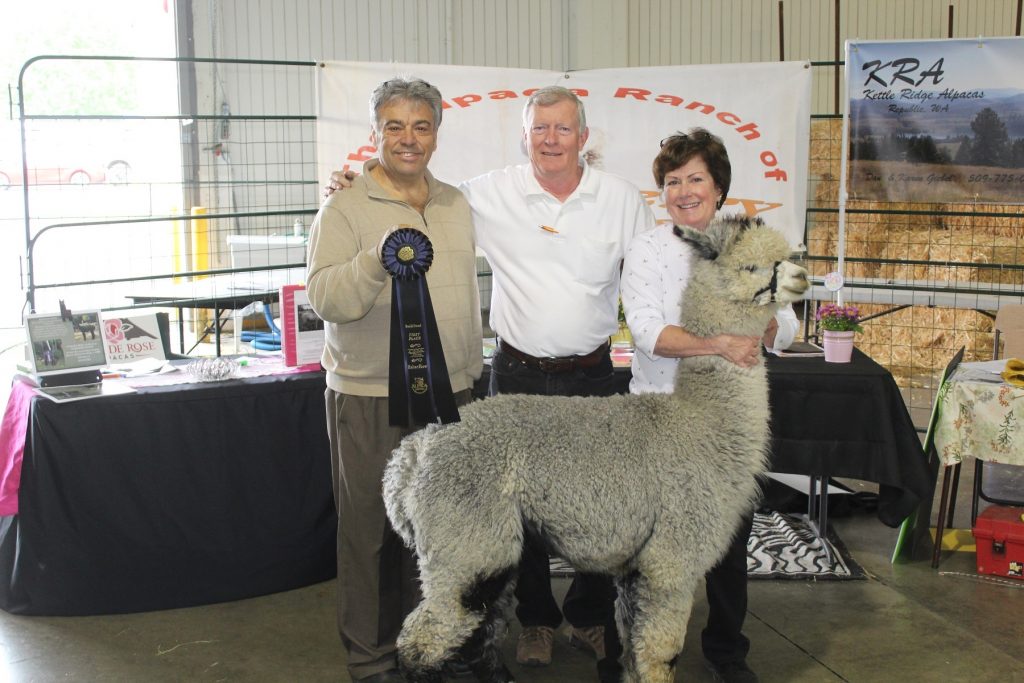 This is what an Alpaca show looks like. The Portland Event Center. On day one it was 95 degrees…..and no air conditioning. A cavernous building filled with the sounds of humming Alpacas. 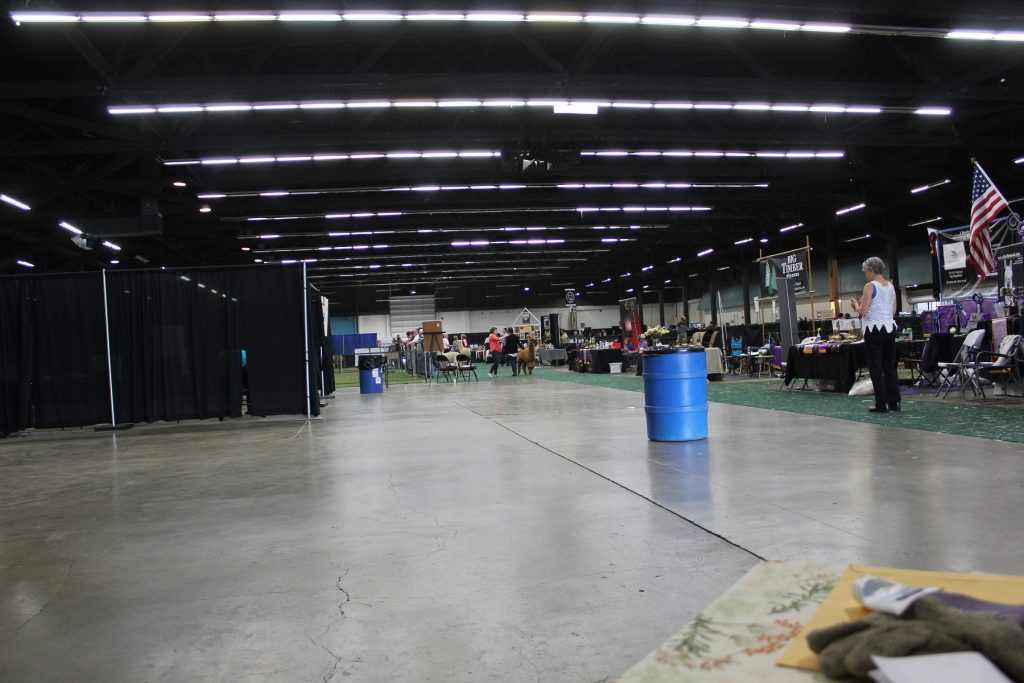 The Judges. Nice people but capable of of making us sweat! 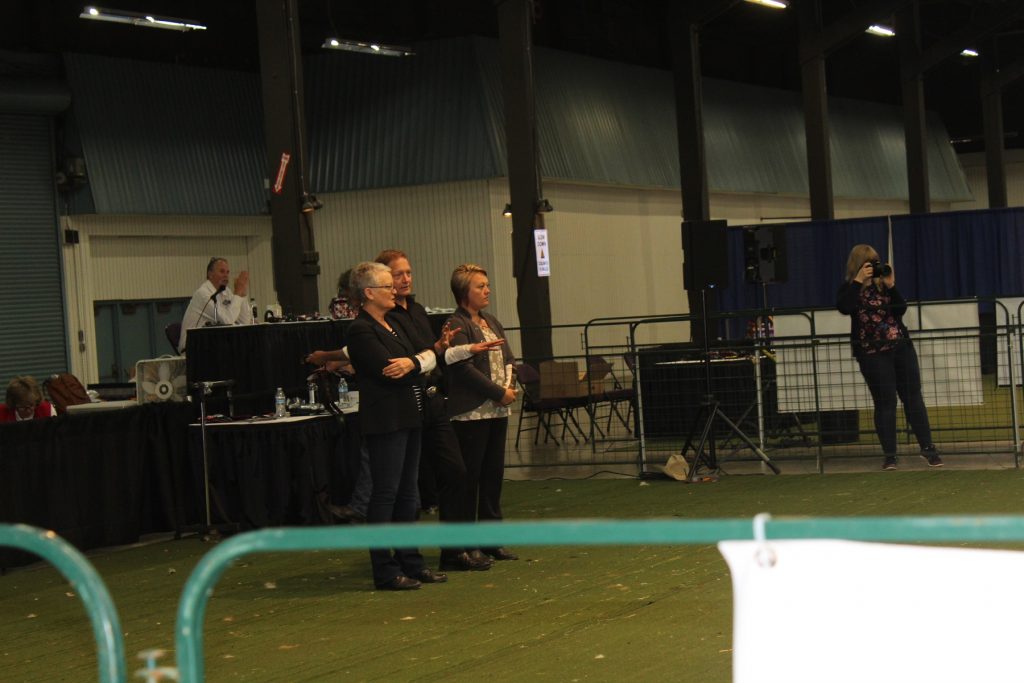 First you catch them. 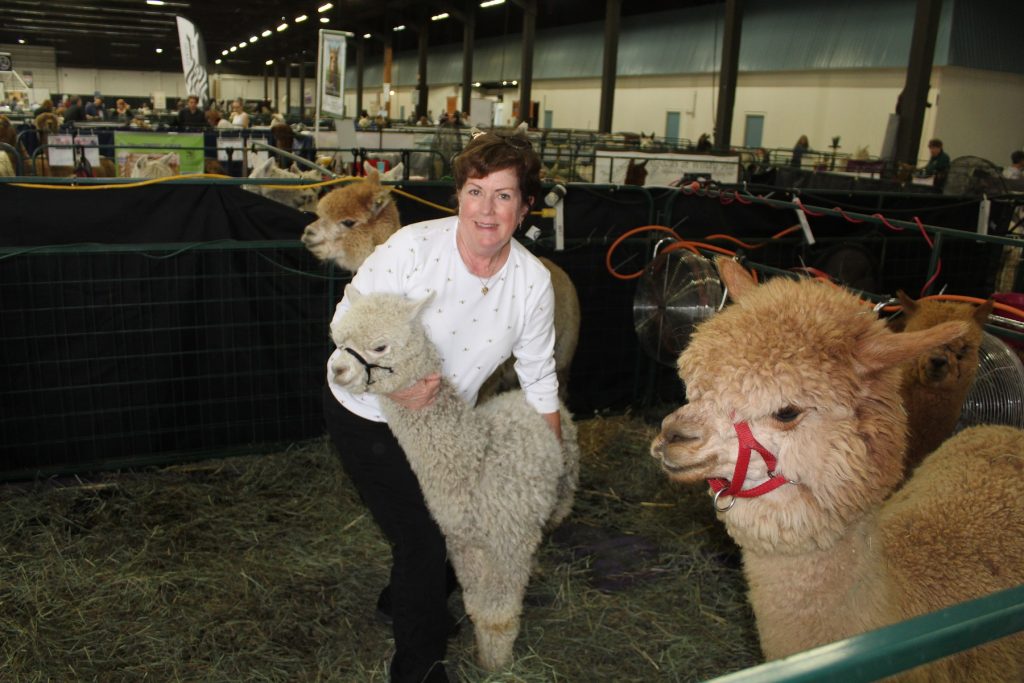 Then you lead them into the arena. Always hoping they do not turn into little bucking broncos! 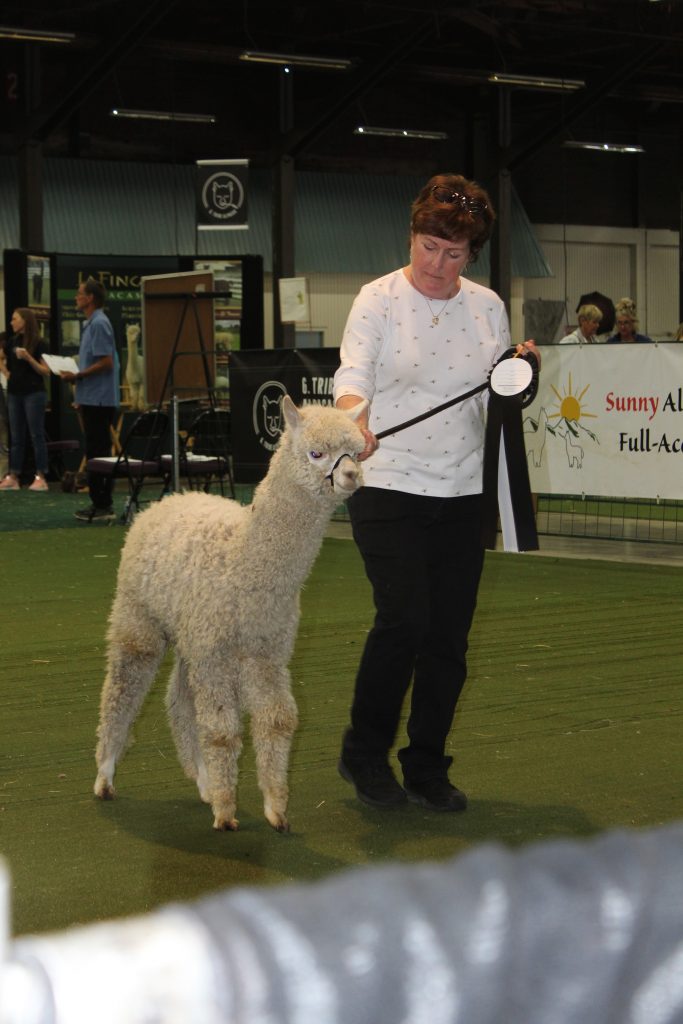 Line ’em up and cross your fingers that all your hard work will get you a ribbon! I showed several animals, both ours and to help out friends. The judges check the Alpacas teeth, their gender, the animals conformity and several aspects of their fleece. Is the fleece dense, have crimp and sheen? How large is their blanket, which is the fleece on the Alpaca’s body. 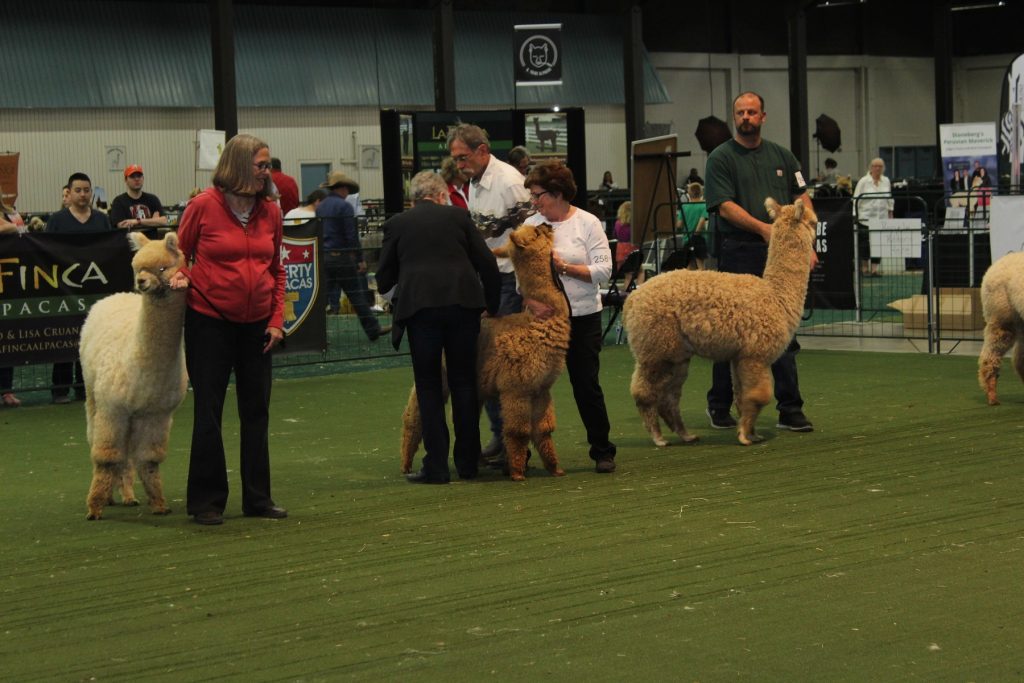 This is our partner, Chris with Elise’s Golden Warrior. He won a Blue Ribbon in his class and was sold at the show for another farm’s breeding program. Our animals currently live at Strawberry Fields Alpacas. 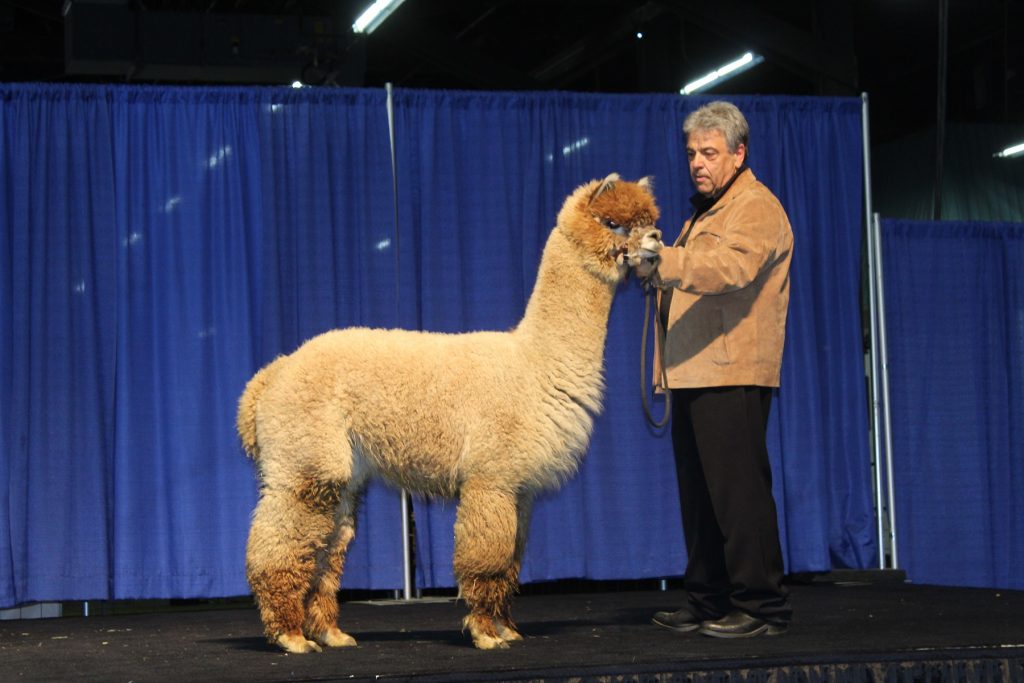 There are two types of Alpacas. Huacaya and Suri. These are Suri’s. Smaller and their fleece has “locks” instead of bunches. 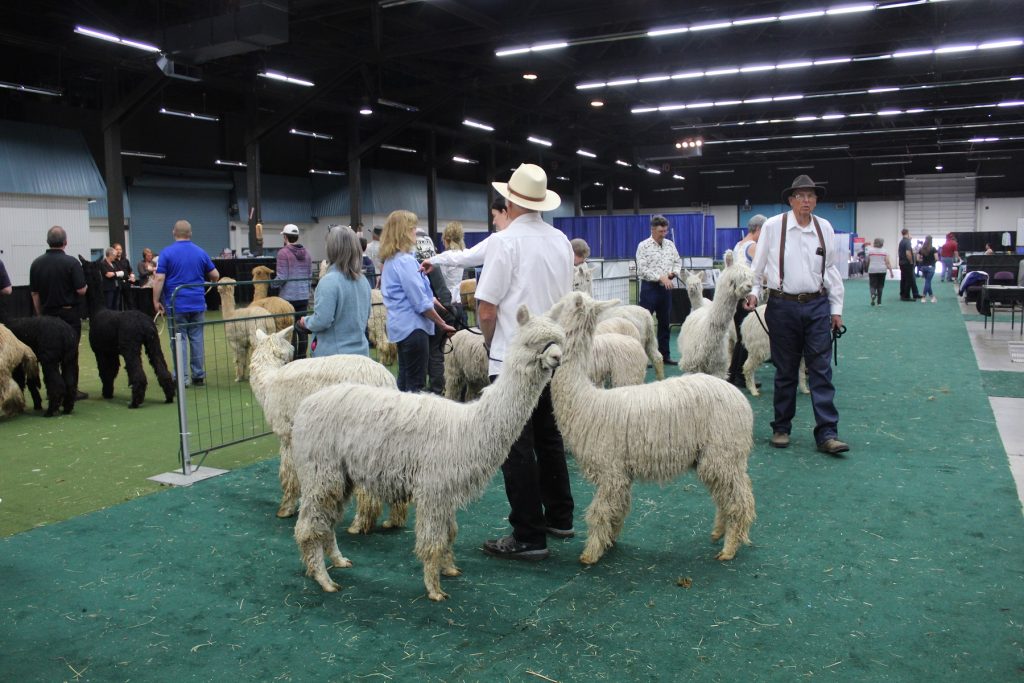 There were about 100 Suri’s at CABA this year! A great showing of these funny little Alpacas! 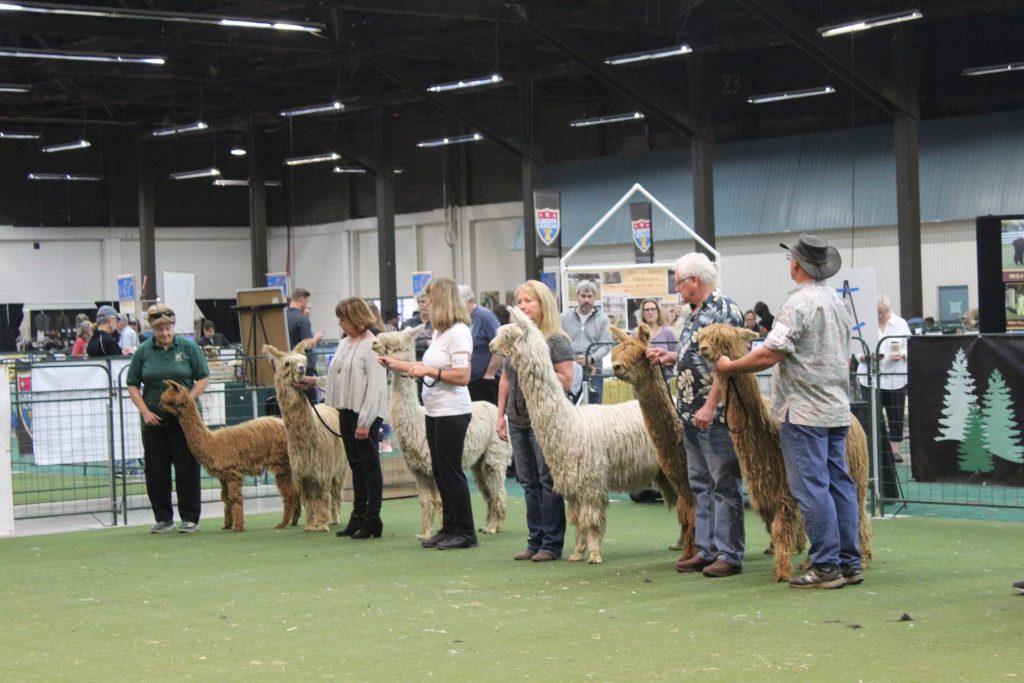 The Alpaca shows here are in Spring. After that, it it way too hot and it’s time for the Alpacas to have their annual fleece shearing. At the shows, every breeder has large fans constantly blowing air to keep the animals comfortable. They don’t like getting shorn but they sure do like being cool and comfortable! 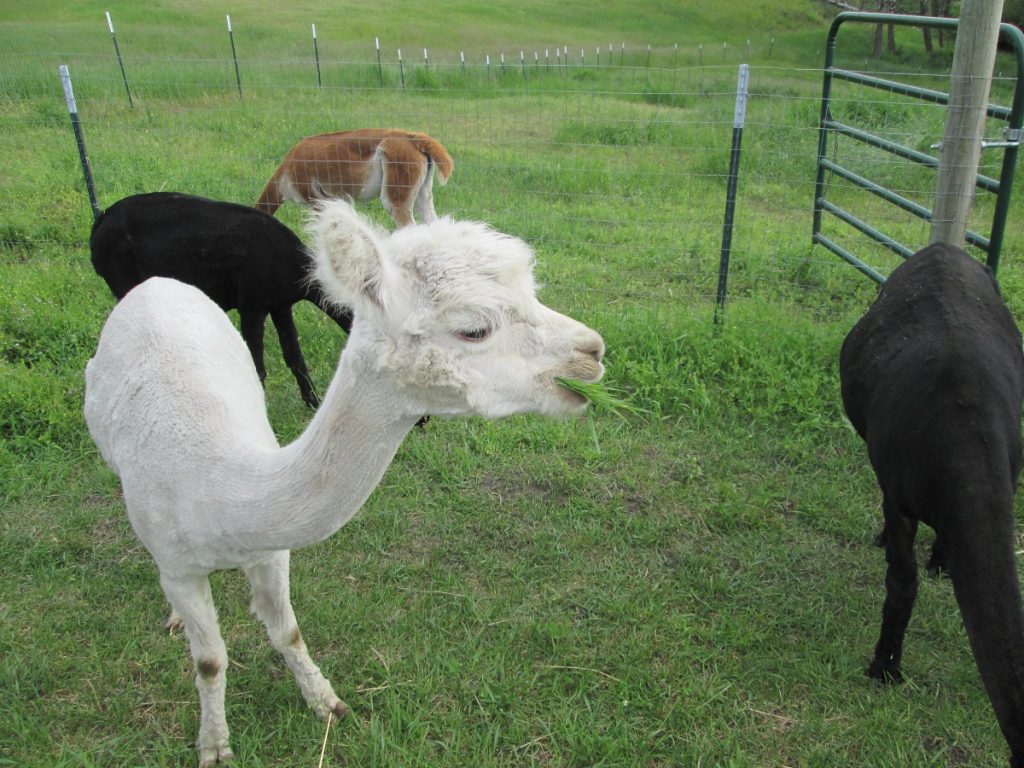 Sparky with Autumn Equinox who was born at the end of September in 2017. Originally, he was rejected by his mother and I bottle fed him. Thankfully his mother finally realized she had a baby and began nursing him. He also received a ribbon at CABA! 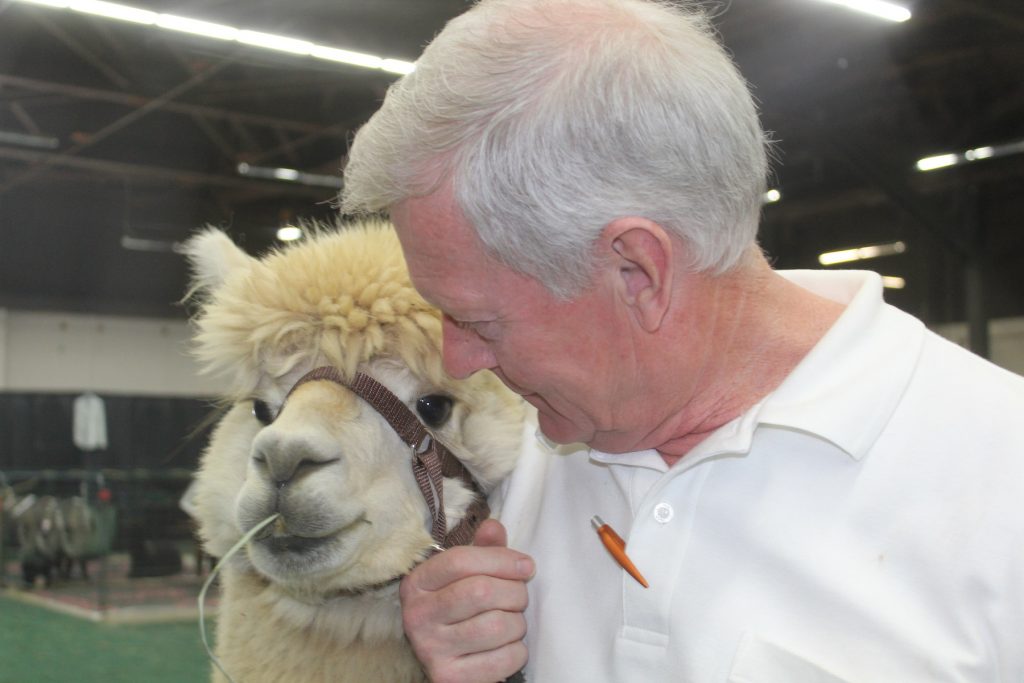 Thanks for coming along with me on this journey to the Columbia Alpaca Breeders Association! I hope you enjoyed seeing a little bit about the world of Alpacas and understand why we and so many other folks are in love with Alpacas. Yes, they are work, but then anything worth doing involves work. For us, and others, it truly is a labor of love.

If you hear of an Alpaca show near where you live, stop in and see the animals. Breeders love showing off their Alpacas and watching little kids faces light up when they see and feel an Alpaca is such a joy!

« Country Life here in Ferry County, Washington
All In A Days Work »