I can’t possibly leave Germany and Bavaria without sharing a recipe for the German dish known around the world. Schnitzel!  I am now a Schnitzel snob but it was not always that way. Oh no, I was not! At its most basic, Schnitzel is really just a breaded pork chop. But the Germans have elevated it several notches until it is a culinary delight. Because it has few ingredients, every ingredient has to be top shelf and cooked just so. There are many ways to ruin a Schnitzel and I have had my fair share of terrible Schnitzel. When we first arrived, I tried it several times as every one told me how utterly delicious it is. The ones I ate, or tried to eat were so bad, I vowed never to order it again. But Sparky told me about how wonderful the Schnitzel’s were when he ate at different hotels on his travels. Finally, one day when we were out, he ordered Schnitzel and offered me a bite. Oh gosh! What a difference! Tender pork. Light breading. Fried until just cooked through and served with fresh lemon wedges. I started making it at home and now I am thoroughly hooked on Schnitzel! Schweine Schnitzel is what is most commonly eaten in Germany. It is simply a pork cutlet pounded until about 1/4 inch thick. Here in Bavaria, I purchase a large slice of pork leg that is already sliced thin and sold as “Schnitzel.”Bring it home and then pound the bejeebers out of it until it is very thin and tender. In the USA, a boneless pork chop is the way to go. Wiener Schnitzel, on the other hand is a slice of Veal. Very tender, delicious and pricey, but rarely found in Bavaria. You see it more often on menus in Austria.

Here is my take on it. Let’s build us some Schnitzel! 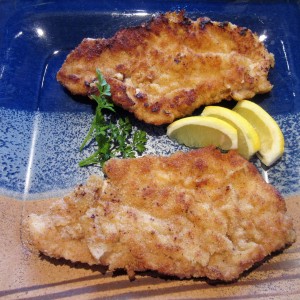 Dry bread crumbs make for a crisp, crunchy crust on your Schnitzel. The only "trick" is to pound the pork cutlet as thin as possible without tearing it. A quick dip in some flour, then an eggy bath and a trip through the bread crumbs is all you need to do before quickly frying the Schnitzel in a mixture of Canola oil and Butter. A squeeze of Lemon Juice and "Wilkommen in Bavaria!"
Print Recipe Pin Recipe
Prep Time 5 mins
Cook Time 6 mins
Total Time 11 mins
Servings 2 servings

« Simply The Best Pizza Dough
The KÖPKE HOF- our transitional home away from home. »