I had no idea that Hungarian Gulyas was a soup! All my life I have enjoyed a thick, rich Hungarian Goulash STEW served over noodles. That is until Sparky and I were going to Budapest and I watched Rick Steves travel videos about Hungary. That’s when I learned this mouthwatering, paprika rich dish that is full of cubed beef,onions, peppers, potatoes, parsnips and carrots  was meant to have a thinner broth and is definitely a soup!  Then when we arrived in Budapes, everywhere we went, and I mean everywhere, there was Gulyas SOUP on the menu and oh…my…golly was it ever delicious! The Hungarian people love their Gulyas and so do we!

This picture is from the Hungarian Cookbook I brought home with me from Budapest. When we visit a new country, I make a point of searching out a bookstore. Not hard to do as bookstores remain very popular in Europe. Just another reason I love the Continent. Why the bookstore you ask? Because I purchase a cook book with traditional recipes from each country I visit. The bookstores all carry cookbooks featuring traditional regional fare and they are printed in both the native tongue and in English. Makes it easy for me and it makes me a very happy tourist! The secret to this marvelous main course soup is a ton of onion and peppers along with loads of Paprika to season the beef cubes. Then comes a lengthy simmer to let everything meld together as the beef becomes velvety soft. I wish I could credit someone with this recipe but interestingly, there is no author listed in the cook book! It is simply titled ” Hungarian Cuisine.” I followed the instructions as written but cut recipe in half and I still had 4 quarts of soup! I gotta tell you Sparky and I devoured big heaping bowls of this, the national soup of Hungary and I will be making it again and again.

This wonderful bowl of goodness is how my Gulyas looks! 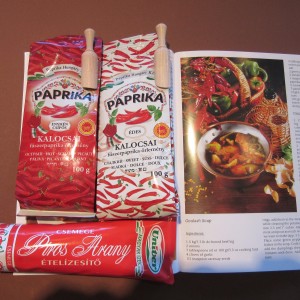 Every Hungarian cook has their own special way of making Gulyas Soup. More tomatoes, no parsnip. Less potato and more carrot. You know how it goes,but the essential ingredients remain the same. Lots of onions and green peppers ( Hungarian Peppers, if available) and garlic and of course, Sweet Paprika! If you like a little extra "kick" try adding a teaspoon of Hot Paprika, but traditionally this soup is highly seasoned but not "hot." Traditionally the meat, onions and peppers along with the Paprika are cooked in Lard, and that's what I used. If you wish, just substitute vegetable oil.
Print Recipe Pin Recipe
Prep Time 30 mins
Cook Time 2 hrs
Total Time 2 hrs 30 mins
Servings 8 2-cup portions