I hesitated to post this recipe, not because they aren’t fantastic but because the pictures are not very good. I was hungry and more interested in eating than taking pictures! So, I was kind of half halfheartedly snapping shots but gee…..they turned out so absolutely delicious it would be a shame not to share the recipe. It’s simple,easy and if you’re looking for something for your Lenten Fish supper, nothing could be better! I won’t be making them again any time soon due to travel and returning to the USA or I’d wait and take better photos. So, if you can put up with some not so good images, we’ll build us some fabulous Fish Tacos!

Now…If you have never had a Fish Taco before, you have to put aside all notions of what a Taco is because these are completely different. Think of your favorite lightly fried fish, topped with Coleslaw, some super flavored Mayonnaise, a squeeze of Lime, maybe a little thinly sliced onion and Jalapenos then finished with freshly chopped Cilantro. And Bob’s your Uncle, you have Fish Tacos!

I first had a Fish Taco at Ivar’s in Seattle on the waterfront and I was hooked! No pun intended…..maybe. The last time was in Cabo San Lucas in Mexico when we went rogue and hired a man driving a not so sea worthy old wooden boat to take us sight seeing. We had a blast! Then he took out just outside the town proper where there were several Taco Trucks run by his friends. We were being either really brave or really stupid, but he was a real nice guy and the Fish and Shrimp Tacos were fantastic! And yes, we remained healthy. Whew!

Here’s what I’m talking about! 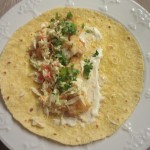 Fish Tacos With Garlic, Lime Aioli and Coleslaw
Make the Lime, Garlic Aioli first and put in the refrigerator while you're cooking the Fish. Choose a firm white fish like Hake, Cod or Haddock. Lightly dusted with seasoned flour and briefly pan fried. Top it with a cool crunchy Coleslaw and Cilantro. Then add that extra layer of deliciousness with some Lime Garlic Aioli. Fold up like a Burrito, i.e., fold in the bottom and then roll 'er up! Such a treat!
Ingredients
For the Fish
Garlic, Lime Aioli
Coleslaw
Optional
Servings: servings, 2 Tacos apiece.
Units:
Instructions
Fish
Lime Garlic Aioli
Finishing Touches
Share this Recipe
Powered byWP Ultimate Recipe